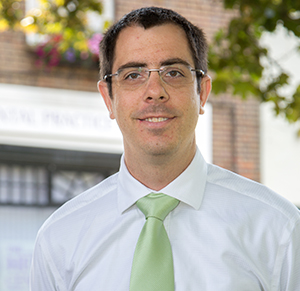 Michael graduated in 2008 from the University of Liverpool and has been developing his skills ever since, most notably in the areas of aesthetics and endodontics.

He became a member of the faculty of dental surgeons at the royal college of surgeons of Edinburgh in 2011, before undertaking a year-long course with one of the country’s most prominent cosmetic dentists, Dr Christopher Orr. This was supplemented by an additional course with Dr. Orr on advanced treatment planning and occlusal management in 2016.

By 2013, Michael had amassed sufficient post graduate training in the field of aesthetics to be granted a full member of the British Academy of Cosmetic Dentists (BACD). A membership level which has as a requirement each member showing continued commitment to further training with the field of aesthetics, as such Michael attends various courses each year to remain up to date with current techniques. He is also a certified provider of Invisalign and Inman Aligner orthodontic systems.

Along with aesthetics, Michael took a keen interest in Endodontics (root canal treatment), completing a post graduate Diploma with merit in 2015 from the Eastman Dental Institute, London. Michael has since worked closely with his fellow endodontic colleagues to continue to advance his techniques. He is also actively involved in providing training and guidance to his fellow colleagues.

Michael is a firm believer that dentistry is NOT scary, his friendly and relaxed manner will put you at ease. He is more than happy managing anxious patients, and is excellent at guiding you through your treatment options and every stage of treatment.

Michael has 2 lovely young children, Jacob and Benjamin (born 2013 and 2016 respectfully), and a huge Chocolate Labrador called ‘Steven’, so has very little spare time! However, is a keen mountain biker when he gets an opportunity.

Get in touch with us today

Click here to find out where we are located

Call us today on:

Find out how we can help you smile with confidence again by booking your FREE Invisalign consultation. Our Care Co-ordinator will scan your teeth to show you a digital simulation of your new smile and will also provide details of the Invisalign treatment options available to you.